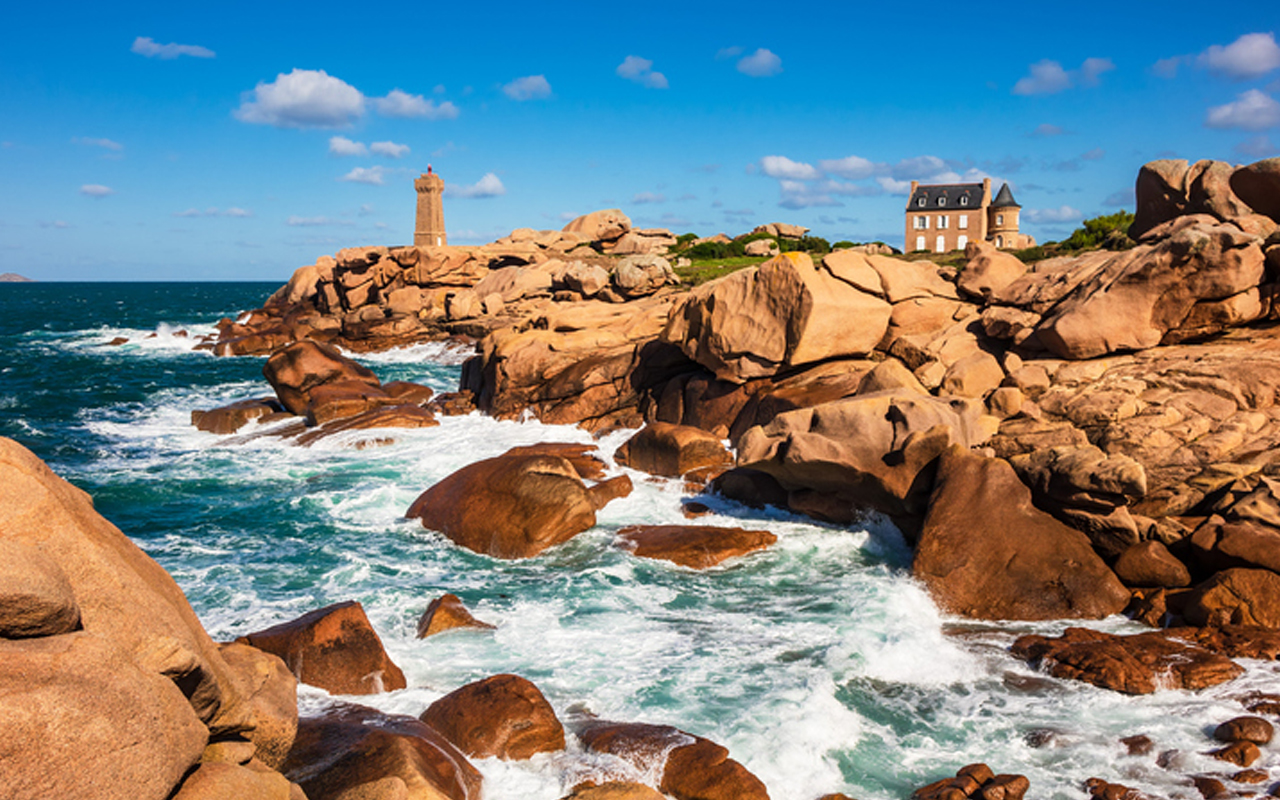 This summer we holidayed on the Cote du Rose, or the Pink Granite Coast, in North Brittany. We’d rented a fabulous gite in the pretty town of Perros Guirec and we were having a great time.

One particular day we’d taken a walk from the nearby town of Port Blanc to the Iles Des Femmes, one of a group of islands separated from the mainland by a long thin causeway of sand and pebbles, no more than 500m from the beach. What I’d failed to realise or even consider was that the tide could cover over this stretch of pebbles, cutting off our route back to the mainland. So you can imagine our surprise when, after spending a couple of wonderful hours on a deserted beach, we start making our way back to Port Blanc only to discover that the tide has started to come in and our only route back is now well and truly submerged. We’re trapped..! I’ve got my wife, two young boys and a dog. We’re all good swimmers, but come on, a 500m swim, fully clothed in cold, choppy waters was out of the question.

A quick search on Google tells us low tide won’t be until 10pm, another 7 ½ hours from now! Karen and I are discussing our options in hushed tones, trying not to alarm the children. Tom’s nickname is Radar (after the character in the TV show M*A*S*H) because he always picks-up what you say even if you’re trying to be quiet or speak privately without being overheard! “It doesn’t matter if we’re trapped here Daddy” he says, “It’s great fun on this island, and we’ve got biscuits and apples to eat, so we can sit it out until low tide!”

Granted, this was an option, but not really one I wanted to go for, knowing full well that the novelty of being Robinson Crusoe would very quickly wear off, as our supplies of custard creams, chocolate bourbons and apples got rapidly depleted. Drastic times called for a cool head and swift action. It was time for Google Translate!

“Allo? Est-ce que c’est la garde côtière? Ma famille et moi sommes bloqués sur une île en face de Port Blanc …”, which roughly translates as: “Hello? Is that the coast-guard? My family and I are stranded on an island opposite Port Blanc…” Now there’s a phrase I never thought I’d have to use. That’s way above my GCSE-level French, thank goodness for Google Translate!

Within 20 minutes, two young men appeared on their rigid inflatable like knights in shining armour! I must have apologised to the coast-guards a thousand times on the five minute journey back to Port Blanc, and I kept my head down as we walked up the slip-way with the locals looking-on at the silly Englishman who managed to get his family stranded on the neighbouring island! The word embarrassed doesn’t even come close! The boys thought it was all a great adventure, and of course we were never in any real danger, but the mind was thinking of all the “what if’s”. A valuable lesson has been learned!