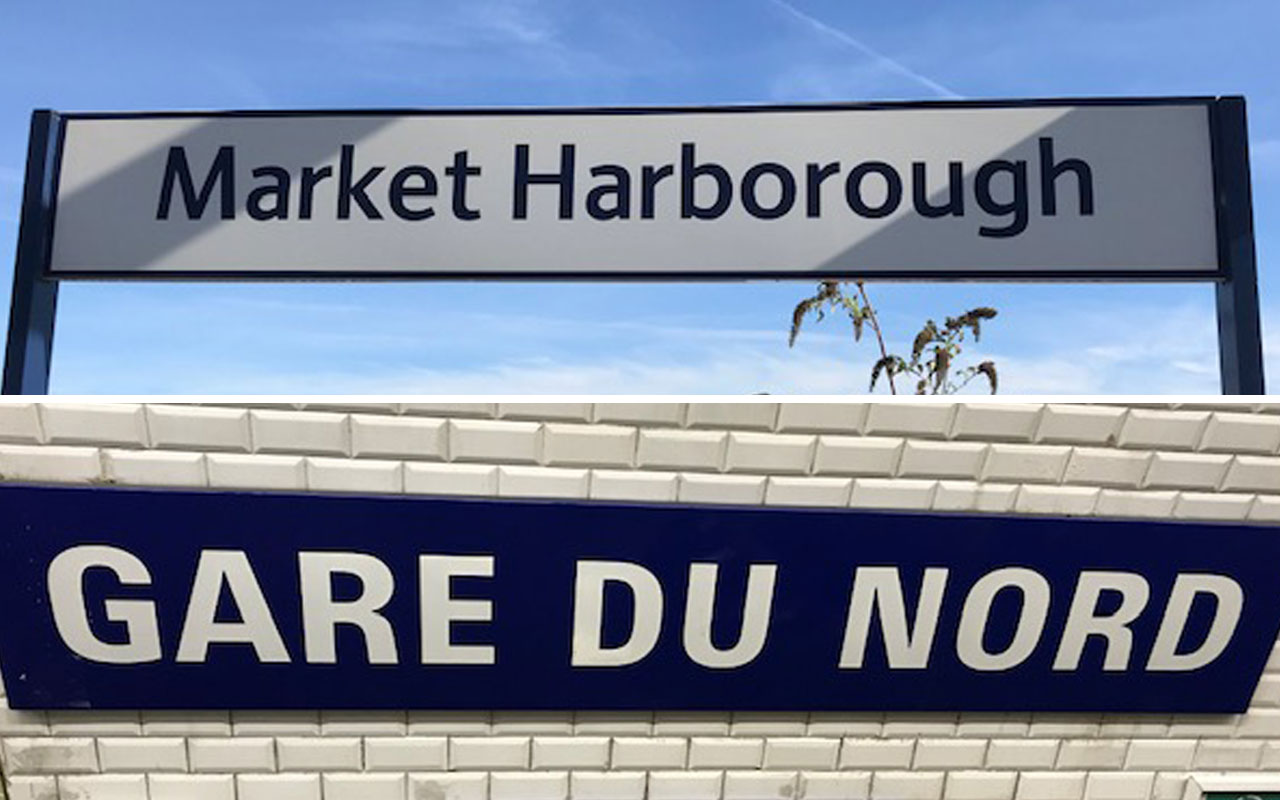 I love France. Ever since my first holiday there (Eurocamp, Canet Plage, nr. Perpignan, 1985) I’ve had a soft spot for the country. Pre-children, Karen and I would often pop across for a weekend in Paris, taking leisurely walks through the parks, nipping in to cosy bar tabacs or cafes for a coffee, or wandering around the museums and art galleries. It was always a good way to break out into an outrageous faux-French accent and test those GCSE-level French language skills!

The team and I headed off to Paris at the end of September to attend SILMO Paris 2018, one of the premier European eyewear trade shows. Its’ been over 5 years since I last went to France, so this was a perfect opportunity for me to test my French skills, and try to impress the team as well with my mastery of a foreign language! Or so I thought…

Our journey began at Market Harborough Station, with a train to St Pancras International to board the Eurostar. After a short team meeting on the Eurostar I offered to buy everyone a drink, eager to go to the buffet car and try out my rusty French. I thought I’d start off with something easy, just to boost the confidence and gets things underway. I needed a witness though, so I took Bhav along with me to the buffet car, hoping he’d be wowed by my grasp of the French language. As I eagerly approached the counter, my greeting and order all lined-up in my head, the chap behind the counter asked “What would you like, sir?” in the crispest of English accents! My balloon was well and truly deflated as I asked for two coffees, a wine and a bottle of beer in English! Not to be deterred, I was confident I would have to use my French at the Gard du Nord as we needed four weekend travel passes, so I’d have to speak French to someone at the ticket office.

The journey to Paris passed uneventfully (apart from a 20 minute delay caused by a group of youths playing on the line just outside Paris Gare du Nord!), and after disembarking we headed off to the ticket office to get weekend travel passes. As is true of any international rail station, Paris Gare du Nord was heaving with people, even at 8 o’clock at night. Off we went in search of a ticket booth, only to find that it was closed! Instead, there were banks of automated ticket machines, each with a queue a mile long! Not a human (preferably French) in sight for me to parlez Francais with! Instead I queued for 20 minutes for an automated ticket machine, tried to purchase the tickets in French, got a bit stuck, repeated the whole process in English, only to have not one, but all of my bank cards declined (no idea why), and had to feed the machine with nearly all of the Euros in cash I had on me!

Weekend travel passes successfully purchased, it was by now late and everyone was getting a bit hungry and tired. Karen, though not on the trip, had organised a table at a nearby bistro café for us, only by now we were late because of the delay at the ticket machine. Off we trooped, down onto the Metro, and a few stops to the La Villette district, next to the canal. With a little help from Google maps, the “le Bastringue” bistro appeared like a shimmering oasis on the horizon, just what was needed for four weary travellers. My eyes lit up as I saw the throngs of people outside, all cosying up sitting at bistro tables, the babble of excited and animated conversation, but the looks on the faces of my fellow travellers was more apprehensive. “What’s up?” I asked, “We’ll never get in there with all of our bags” came the reply, “And we’re late for our table.” said another. Being the boss and tour leader I knew I could take control! And I could definitely use my French now! In I strode, leaving the team waiting outside, lots of “Excusez-moi” and “pardons” as I burrowed my way to the bar. A friendly barman enquired “monsieur?” and off I went into full GCSE-French mode! “We have a reservation” I explained, in impeccable French, “but I’m afraid we’re about an hour late, is that ok?”, “But of course” came the reply, without hesitation, and a casual Gallic shrug of the shoulders. “Where are your friends”, he asked. “Waiting outside, we have our suitcases with us” I explained. “Pas probleme” my French friend replied “Bring them inside.”

I brought the rest of the team in, and my new friend the Barman got us seated comfortably at a cosy table by a window overlooking the street. Menus on big chalk boards promptly appeared and we eagerly set –about the task of deciphering the menu, with a little help from Google translate! The bistro was heaving, the drink was flowing and all seemed to be having a great time. This was the Paris I remembered from my B.C days (Before Children), and I was thoroughly enjoying myself!

I would have liked to stay out for longer, but it was by now well after 10pm and we still had to get to the other side of Paris, to the Parc des Expositions next to Paris Charles de Gaulle airport, a good hour away. Our beds were calling, so it was time to call it a day and head for our hotel.

On the journey to the hotel, I was feeling quite content with myself. I’d got the team to Paris safely, I hadn’t lost anyone en route, and despite several thwarted attempts, I’d managed to parlez Francais. We were late for dinner but heh I’d had fun. I’d understood and been understood in return, which is always very satisfying when trying to communicate in a foreign language. The truth is that I’m sure my friend the Barman at le Bastringue was a fluent English speaker, but he was happy to speak to me in French. Whether the team were impressed with my French skills I’ll never know – they were all dozing on the train to the hotel!

As many of you know by now, we work with the crème de la crème when it comes to our frame collections and lens suppliers. Our frame collections are hand-curated by yours-truly and my team. We make a significant investment every year to bring you the best of independent, artisan eyewear designers and manufacturers from around the world. SILMO Paris is probably the premier European optical trade show, where the best eyewear designers and manufacturers from around the world congregate under one roof for four days, usually at the end of September/early October. Very few opticians from the UK travel to such trade-shows, and exhibitors and fellow opticians often react with delight and surprise when they realise that we’re from the UK! As we missed-out on the Munich trade show in January because of the refurbishment works, it was time to visit SILMO Paris this September instead.

We had a busy, full-on intensive two days at the trade show, reacquainting ourselves with existing suppliers and striking-up new friendships with new brands.